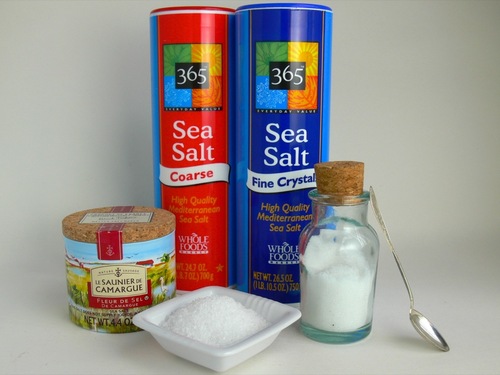 Whether evaporated from sea water or mined from rocks that were part of an ancient ocean, salt is something we cannot live without. In this post I will attempt to summarize the main types of salt and recommend best uses for each kind. I must admit that until recently I was unaware of the difference between salts and while I have been cooking with the correct salt I have not really known why. I always thought, “salt was salt”. Some had different textures and flavors but ultimately they gave roughly the same flavor and had the same sodium content. I was wrong. Now that I have learned the differences I hope to help you make the best decision when cooking. I have also gone back and updated all of my recipes to be more specific regarding salt use.

The texture of the salt determine the amount of sodium. Coarse salts like kosher salt and coarse sea salt are made of large granules that contain less sodium (by volume) than finely textured salts because the granules are not able to nest so closely together. For example: 1 teaspoon of table salt has the same amount of sodium as 1 tablespoon of kosher salt. So when choosing a salt your first priority should be size of crystals followed by means of use, cost and nutrient level.

Info: This type of salt is heavily processed; it is bleached, heated and is not always pure salt. Often calcium silicate is added to it as a non-caking agent. Because this salt is so fine 1 teaspoon has about the same amount of sodium as 1 TABLESPOON of coarse salts like kosher and coarse sea salt. This salt comes in plain and iodized (see “Iodized table salt” for more info). Since this salt is so heavily processed and often has additives, I recommend using fine sea salt instead of table salt (see “Sea salt” for why).

Best Use: Same as table salt, however you should use this salt if you do not get enough seafood or dark greens in your diet

Info: In addition to all the processing that goes on with table salt, this salt is then sprayed with iodine in order to help those who do not get enough seafood and dark greens in their diets. I recommend eating more greens and using fine sea salt instead (see “Sea salt” for why).

Info: This salt is either harvested from evaporated sea water or underground deposits. It can be the same as sea salt, but not always. However it is always coarse in texture (whereas sea salt comes in fine and coarse). Because of the cost this salt is the best choice for all your cooking needs (it is often less expensive than coarse sea salt). If you are buying kosher salt as part of an approved Jewish kosher diet, make sure to look for the kosher certification on the packaging. This is because “kosher” has two meanings. It can refer to the size of the granules (so named because Jewish butchers began using this coarse salt to prepare meats in accordance with their dietary guidelines) or it can refer to the salt having a kosher certification from a Jewish religious organization ensuring that the product was processed in accordance with the Jewish faith. So essentially you could get either “kosher-style” salt which is coarse salt, or “kosher-certified salt” which is coarse salt that is certified by a Jewish organization.

Texture: Comes in fine and coarse

Best Use: Fine sea salt is an excellent replacement for table salt, while coarse sea salt is best used to season food after it is cooked. Coarse can be used interchangeably with kosher salt however is more expensive and looses the delicacies of its flavor when cooked.

Info: Minimally processed if at all, this salt is harvested from evaporated sea water. Because of this minimal processing it contains traces of many natural minerals including calcium, iodine, iron, magnesium, manganese, potassium and zinc. These minerals are not added to the salt, they are naturally occurring and add to the flavor of the salt. Fine sea salt is an excellent replacement for table salt though more expensive. Coarse sea salt can be used interchangeably with kosher salt, however, you should be aware that it is usually more expensive and if it is cooked it looses many of those trace minerals making it essentially the same as kosher salt (a lot of kosher salts are in fact made of sea salt). In this way sea salt is similar to extra-virgin olive oil; it is more expensive and looses the delicacies of its flavor when cooked. There is no harm in cooking it though, as long as you are not worried about the cost. Sea salt can also come in many different colors and flavors such as red Hawaiian, pink Himalayan, French Gray, black lava or the widely renowned best-salt-in-the-world Fleur de sel.